1) LIGHT AND DEATH ON THE INDIAN BATTLE STATION

Mom’s turquoise-blue saree morphed into her silver Battle Station uniform. She pulled us in for a long hug before rushing out the door. She’d be needed in the Situation Room with all the other Telepaths.

(And here’s a lovely review of the stories in this magazine on the Quick Sips blog, including one of this story.

Excerpt: “It’s about love and war and loss and bravery. And it’s also a lot of fun, taking some dark elements and still finding its way to a light and joyous end.”)

Recent college graduate Jerry Patel wants to manage a motel. He and his boyfriend Peter visit one that’s listed for sale. But the Chicken Monster Motel is no ordinary hostelry.

The story originated in a mix of the images and ideas: Baba Yaga’s house, family relationships as children grow up, the generational changes in values among immigrants to the US. What happens with my stories is that layers of commentary get packed into a few words and an often lighthearted plot, and it can take me months or years to unpack what I’ve written. In this story, for instance, whether the mother is a supporter or enabler depends on the viewpoint.

The anthology (and this story) was reviewed in Tangent Online by Victoria Silverwolf. Her take: “…pleasant to read.”

3) THE CHURAIL AND THE CROW 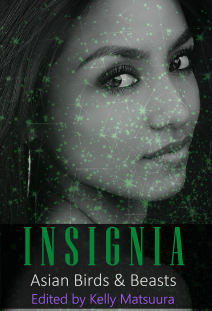 The Churail and the Crow was published in Asian Birds and Beasts anthology  from Insignia (2018).  I’m not sure of its eligibility, though, because it builds on a flash story earlier published as “Lena” in Ruthless People’s Magazine. It’s gone from 1000 words to >2000 words, but it’s built on the same armature.

If you’re reading for awards, I’d be delighted to have mine considered.