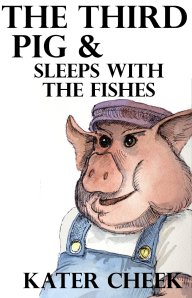 Kater Cheek, my friend and Clarion-mate, has several novels and stories for sale on Amazon.

She’s put her short stories out out as ‘doubles’ – two short stories per download. Recently I bought “The Third Pig” & “Sleeps with the Fishes” for my Kindle. I always enjoy Kater’s work, but these two might just be my favorites among her short stories. They’re both clever, funny, and wonderfully satirical.

“The Third Pig” retells the story of the three little pigs. Johannes, the 3rd pig, is hanging out with his two brothers Aloysius  (the aesthete who is going to make his house of sticks – wattle and daub, that is – but is delayed because the bathroom tiles didn’t match and ad to be sent back) and Fritz, who’s planning an environmentally-friendly straw-bale house with solar panels. Hans is building his house of bricks of onsite river mud. They’re all behind schedule on construction and living in a flimsy tent, but fortunately Conn the wolf is vegan…

…and then Al and Fritz disappear. Now it’s up to Hans to unravel the mystery and decide just how far he can trust Conn.

If you like fairytales retold and updated as light-hearted satires – check this out.

I can’t decide which the best bits are, there are too many good ones. (It would be perfect for a drinking game, catching allusions to fairy tales and nursery rhymes.) The reference to “Sty” magazine (Al’s inspiration); the bar scene with Elsie the sheep and a couple of others, where the party gets a little wooly and she gets three sheep to the wind and they’re all talking about a touring band from Bremen; or Rosie, who has the misfortune to help a witch and now gold coins fall from her mouth when she talks, so she has to use a chalkboard to communicate; or when Hans describes the filthy conditions at the Seven Dwarves’ cottage and adds, “bear in mind it’s a pig that’s telling you this”.  It’s a hoot with heart.

So is “Sleeps with the Fishes,”  which is set in a college dorm. “It’s one thing to read about spontaneous therianthropy, and quite another to suddenly find yourself dick-deep in a mermaid’s cloaca.”

And when the said mermaid – who is your college classmate Ashlee, transformed just at the most inappropriate moment – starts to drown on dry land, you have to do something. You can get her head into a trashcan full of water – but now the water’s getting stale. She needs to be in the ocean.

How are you going to get a slippery, 8-foot mermaid to the ocean before she suffocates? Well, with the help of Luo, Karl (who’s supposed to bring a truck but his sister borrowed it and all he has is her Honda), the RA who keeps flapping on about 911, the Chinese guy from down the Hall who doesn’t speak English but quickly figures out the situation, a four-woman Taiwanese flag corp, and Karl’s girlfriend’s Dad…

If you’re in the mood for something light-hearted, try these two stories.

The doorbell rang this morning, with the distinctive “Package drop-off” sound that delivery-men use. I went to the door and brought in the box.  It was medium-size, and quite light, and it came from my friend Kater Cheek: author, artist, and Clarion-mate.

Inside was this gorgeous thing. 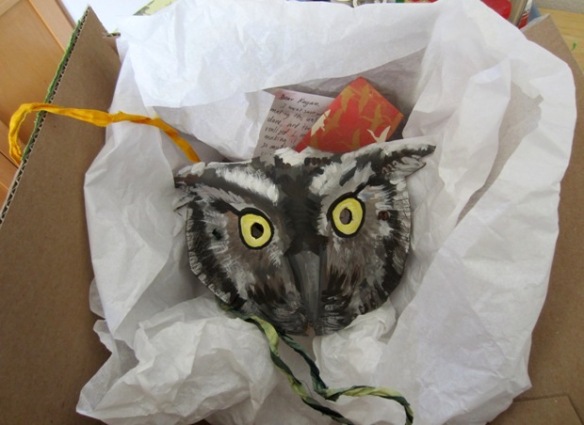 With it was a note, folded into a little Japanese-paper envelope. It said in part, “I wasn’t sure why I was making this until it was done, and then I realized I must be making it for you.”

Kater knows I have a weakness for owls. This mask is utterly awesome.