I’d given up blogging about the Cons I attended, until the recent LiveJournal kerfuffle made me realize that I really valued having those Con notes afterward. So I’m starting again.

I only heard about Norwescon last year, when writer friends rounded up a bunch of people for breakfast. Next year, I decided, I really must attend the Con as well. It’s large – around 3,500 people, and very much a ‘big tent’ Con with books, media and costuming. There are literally thousands of people milling around, many of them in quite fantastic costumes. 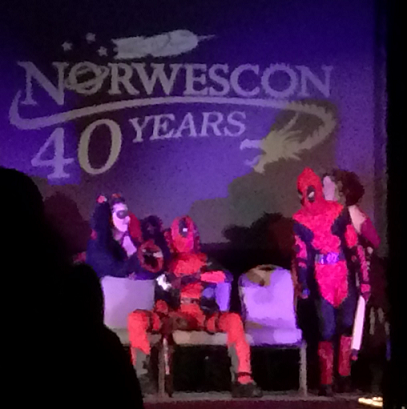 were long, but once that was done,  I attended panels, made a round of the pretty awesome Dealer Room, visited the art show twice, and also got to the Masquerade (amazing) and the Rocky Horror Picture Show, which I’ve wanted to see for years.

It’s also a great Con for meeting people, if you set it up with them. (You *can* run into people, but with such a crowd, it’s easier with planning.) I’m lucky to be a member of Codex, a neo-pro writers group, and so I knew a few people there. I imagine it could be quite daunting for someone altogether new.

Overall, I attended a bunch of writing/ publishing panels, as well as a couple on other media (film, sound) and a few others that were new information/ experience. I am putting some of the panel notes into separate posts for easier access. And, of course, got to hang out with a great bunch of Codexians.  I really hope I can make it again next year.

Links to my Panel Notes from Self-publishing Panels:

Each year at Norwescon, the film team and a bunch of volunteers put together a short film over the weekend. It’s planned on Friday, shot on Saturday, and shown on Sunday. They showed us two films made in previous years They talked of how film-making was now very affordable, since the technology costs were very low and even excellent equipment could be rented at a reasonable price. Anyone could make a film – it was  a matter of learning (and the internet provided lots of information) and then, practice.

I’ll put panel notes on other panels in separate posts. I don’t want this thing to become 5,000 words long!