Nagarahole, India, January 2020. Indian forests aren’t like Africa, where the animal density is so high that zebras graze like cows in the Great Rift Valley and giraffe invade your hotel premises. In India, you have to *look*. So we were in a bus, driving around in the sanctuary, with an excellent naturalist guide, looking. (See Nagarahole, with Tigers and  Gaur Bull in Love for some of what we saw.)

The fallen trees were the first clue. There hadn’t been a storm, and only middle-sized trees were down. Could it be…. elephants?

Yes. Because shortly afterward, our guide said, “There’s an elephant ahead.” There was. It wasn’t very large, as elephants go. As we drew nearer, he added, “It’s a young male.”

The elephant gave a plaintive trumpeting call. No one responded. Where was his herd?

As it turned out, just across the road, in a thicket, browsing.

“But they’re not responding,” I said.

“No,” said the naturalist.  “They won’t let him come back. It avoids in-breeding.”

Elephant herds are females and their calves. Male elephants get pushed out of their herds when they reach puberty. 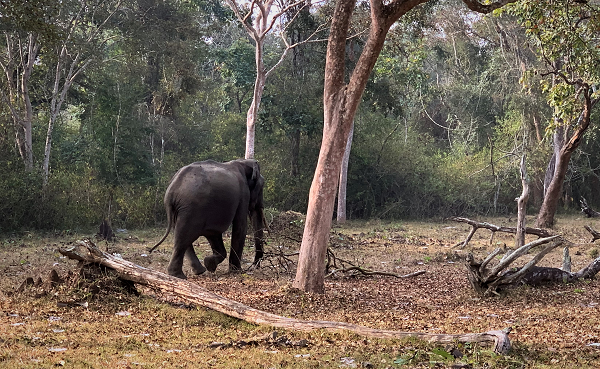 The young fellow got the message. Time to go.

He took off down the road. Soon he was out of sight. 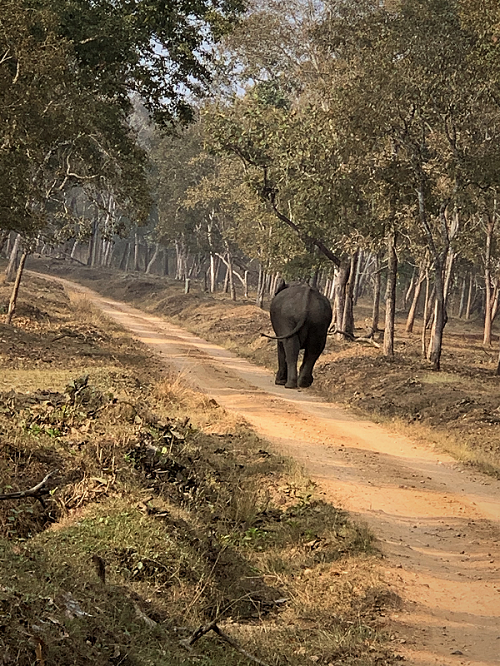 Leaving home, leaving his herd. Young males sometimes make friends with other young male elephants, or they end up alone. Wonder what happened to this young guy.