I read Little Brother soon after it came out. I’d heard Cory read from it during Clarion before it was published, and found it both exhilarating and shocking. It was still the Bush era, and my first reaction was, Have you talked to your lawyer? 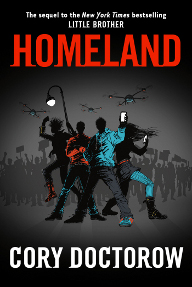 Well, the book came out and it was a hit. Homeland is the sequel, and somehow I just got around to reading it. I don’t know why I waited. I loved it.

The premise is that though the President has changed, the government hasn’t really – surveillance continues just as it had before. I guess it’s always more difficult to dial back powers once any organization has them…

So M1k3y is back under his real name, Marcus, and he’s fighting again. When an old friend hands him a dangerous USB that will allow him to access over 800,000 damaging documents about government and corporate wrong-doing, he’s got to decide how to handle it. The ethical and practical dilemmas that result drive the story.

The book opens at Burning Man, and that grabbed my attention. I’ve always wanted to go to Burning Man, but given the logistics and conditions on the playa, it’s increasingly unlikely that I ever will. This took me there with clarity and atmosphere.

The book seemed to introduce a cool new tech every chapter, in a way quite accessible to non-techies. It took every new technology or idea  I’ve found intriguing – from 3-D printing to quadricopters to People’s mic – and wove them into the plot.

Though this isn’t really a character-driven novel, I felt I’d got to know Marcus and the others well enough to be involved with them. And I found the plot gripping, leaving me wondering what I’d do in his place.

The book is intensely political, in the same way as 1984 is political. If you think Edward Snowden is a hero, you’ll probably enjoy it. If you think he’s a thief and a scumbag, the political values will probably make it unreadable.