A few years ago, someone took me to Skagit Valley, Washington State, at tulip time. (It’s usually the whole month of April – though this year they think it will continue into the first week of May, 2018).  Last Saturday, I took someone else to Roozengaarde, one of the two major flower farms in the valley. It was spectacular.

We chose Roozengaarde over Tulip Town (next time!) for two reasons – it’s open later, upto 7 pm compared to 5pm for Tulip Town; and it has a brilliant display garden. They mix different types of tulips in every color. 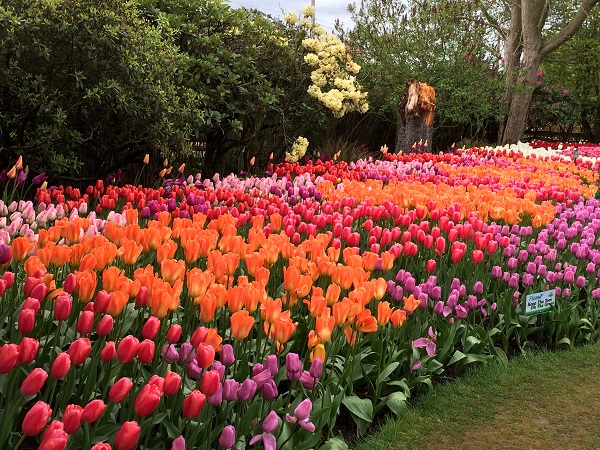 Then we walked around the fields – each one planted in a different color. That’s where they get the bulbs you can order from their catalog for Fall delivery. They appear in bands of color.

It was overcast, even drizzly on Saturday, which made for dramatic skies. 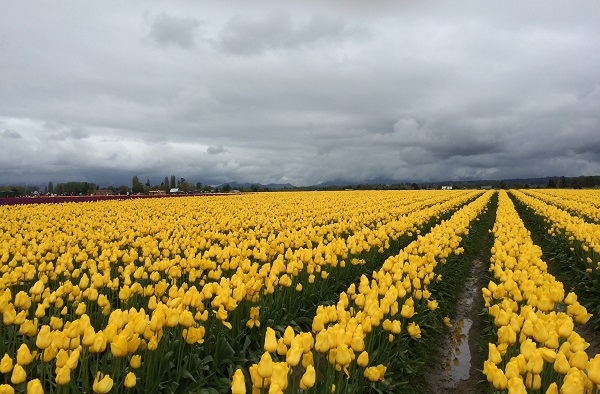 The paths were *so* muddy, it was one step at a time – especially the paths that were not graveled. They’re like clay slip (emphasis on “slip”).

The kids were having a great time, though. One dad was trying to be careful not to get his toddler’s feet wet. Kid stared thoughtfully at a puddle, and stomped in it. Then she did it again. He scooped her up, but unless he was going to carry her the whole way, that kid had many puddles in her future. Overheard from another little girl: “I’m mudskating!”

There were visitors from all over, especially from Asia. (I guess Europeans can find tulip fields closer home!) 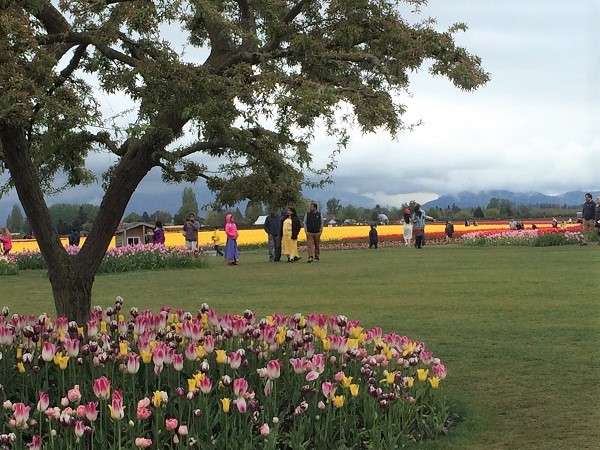 The most unusual flower I saw was a  giant orange variety of tulips.

I didn’t think they were very pretty, but they were certainly dramatic. That boot is in the picture for a size comparison!