This year’s World Fantasy Convention was in Washington DC, in other words – accessible. (Last year, it was in Brighton, UK, and the year before, in Canada.) The last time I went was San Diego, in 2011. (I blogged about it here.) So I grabbed the chance to attend. I’m so glad I did.

The highlight of the Con for me was the people. I’m in an online forum of neo-professional writers called Codex. I’ve met some  in person, usually at Cons. This time, around 40 Codexians attended WFC. This gave me a group  of writers to hang out with – smart, friendly, and interested in a broad range of topics. It was such a pleasure meeting people who I’ve mostly “met” only online. I also caught up with people I know from other cons, and of course Clarion peops like Jeff and Ann Vandermeer, Delia Sherman and Ellen Kushner, and my Clarion classmate Desirina Boskovich – who I was meeting for the first time since 2007!

WFC had two tracks of programming, and one track of readings. After my recent experience at Convolution, which had so many tracks I lost count, this felt pretty manageable. This meant that they were all pretty well-attended, since they didn’t have ten events simultaneously competing for everyone’s attention.

All the panels delivered very much what they promised in their descriptions. On Thursday, I went to Humor in Fantasy, and Fantasy and the Reality of Law Enforcement. Friday, it was Language and Linguistics in Fantasy; Adoption and Fostering in Fantasy; Beyond Rebellion in Young Adult Fantasy; Historical Influences in Fantasy. On Saturday, I made a hard choice between Animals in Fantasy and International Fantasy and Translation, and opted for the ‘Translation’ panel.

Every one was interesting and I learned something, but the standout was ‘Law Enforcement.’ Two of the panelists were an FBI person and a police officer – and both are writers. So they had interesting insights about law enforcement, how it’s portrayed, how to make it authentic without being boring, and the role of paperwork in law enforcement. One point that was valuable to me: Use of force. Police officers very seldom discharge a firearm. If there are questions about it later, the standard to which they’re held is not “What does the public think?” It’s “what would an experienced and trained police officer have done in that situation?” 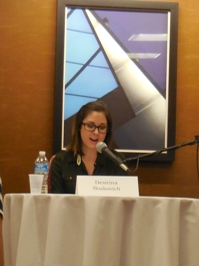 I didn’t go for the Awards banquet; instead, the Codexians had a group lunch at Cinnabar. Excellent company, marvelous conversation. Later, as I was preparing to leave for the airport, I met Ellen Klages carrying a World Fantasy Award – the cartoon head of HP Lovecraft – and congratulated her. I hope we’ll see her at FOG 5 in March 2015.

Of course I had to go to the Steampunk User’s Manual launch party. The book is co-authored by Jeff Vandermeer, one of my Clarion instructors, and by Desirina Boskovich, who was in my Clarion 2007 class. It gave me a chance to meet Desirina again after all these years, and though we didn’t get to hang out a lot, we did get to catch up. I also got to talk with Ann Vandermeer a little, though as the main organizer for the party, she was doing a lot of the behind-the-scenes management.

I’d meant to get  copy of the book and ask Desirina and Jeff to sign it for me but unfortunately I waited too long and it was sold out.

Hyatt Regency turned out the be a superb con hotel. The meeting rooms were arranged around a core area, most of which we could access both by elevator and escalator. Unlike some hotels, where attending any panel involved a very long trek, here the rooms were clustered and accessible. The staff were friendly and helpful, and I really liked the food – I ate most meals at the two restaurants, Cinnabar and Lobbibar. It was good to excellent, and quite reasonable for hotel restaurant food.

Rolling Thunder had a convention at the same time, and a large number of bikers floated around the lobby in cool leather vests covered in patches. This organization focuses on keeping POWs and MIAs in public memory and before legislators – and many of them are bikers. They hold an annual rally in DC with thousands of bikers.

WHAT I BROUGHT BACK

On the freebie/ exchange table, I was surprised and delighted to find an anthology that had one of my stories. It was Daily Science Fiction’s compendium of stories from their first year, called ‘Not Just Rockets and Robots.’ My story, Chick Lit, is the same one that was later republished in Polish.

The Dealers’ Room was mainly books – I lost count of the bookstalls. Some were retailers; others were individuals or groups promoting their own books. I resolutely avoided buying any, though I was tempted; my suitcase was already several pounds heavier than when I came in with just the freebie books.

They also had jewelry, which is easier to buy because it’s lighter and takes less space. I especially liked Janet Kofoed‘s work; she does lost-wax castings in silver and copper, and strings them with beads or pearls or stones into necklaces, rings, and ear-rings. I bought a copper lunar moth pendant on a string of pearls.