One of the things I love about India is how much life is lived in the open. It’s as though you can see under a skin of the world that in other places covers up the processes of living.

I was recently on a road trip outside Bangalore with friends. On the way back, I saw some woven rush mats with interesting spiral patterns standing in roadside villages. They looked elegant, in a minimalist sort of way. “Those are for silkworms,” said Pratima, noticing my interest.

Really? So we stopped at one of the villages to look. Pratima speaks Kannada, and the villagers were happy to respond to her interest.

For people unfamiliar with how silk is made: It’s unwound from the pupae of the silkworm moth, which is killed in the pupal stage (usually by immersing it in boiling water). Breeders keep a stock of moths, and collect the eggs they lay. The larvae go through five instars (stages of growth) before they form their cocoons. They eat mainly mulberry leaves, and so South India has mulberry plantations for sericulture.

Sericulture in the state of Karnataka is a cottage industry, providing flexible employment without need for serious capital investment. What we saw in the village were the late-stage silkworms, and the cocoons. I’m not sure whether they sourced the silkworms as larvae from a breeder, or whether they purchased the eggs and hatched them. We did see sheaves of mulberry leaves being brought in, but since it’s the late-stage larvae that are the most voracious, that didn’t indicate very much. I think they harvest the cocoons and sell them to other processors who actually unwind the silk.

The village itself was a delight. The houses were painted in bright colors, and vegetables grew randomly here and there, probably volunteers escaped from kitchen gardens. A hen with half-grown chicks wandered around, with no apparent attempt to contain them. A bunch of curious kids gathered around us, listening to their elders explain how they cultivated silkworms. Pratima asked why they weren’t in school. They were still on holiday, they explained. They had another 2 days off. We smiled our goodbyes, thanked them, and left. 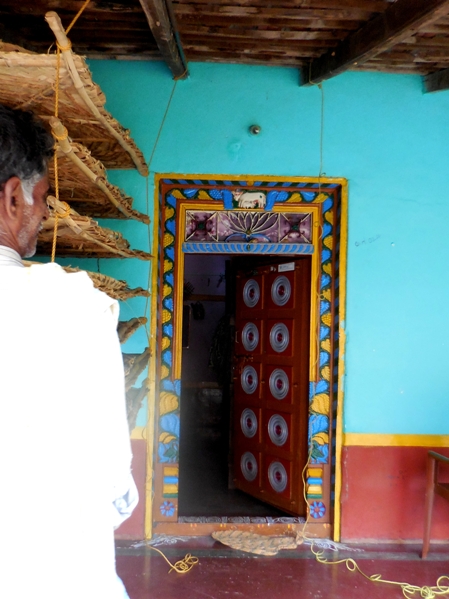 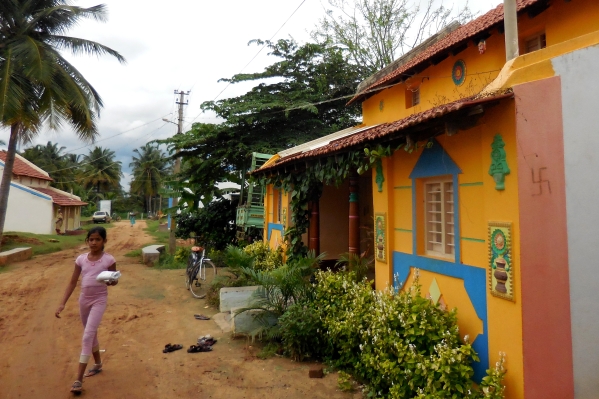 (Edited to Add: Incidentally, the swastika symbol in the picture above? It’s the auspicious symbol, not the Nazi one that Hitler stole. Talk about cultural misappropriation.)